There’s a tradie at my house. We’re talking about a local bar, who have gone full QAnon. Like, anti-vax posters in the windows.

“I guess we’ll have to hit up the other pub from now on” I say.

He looks at me and shrugs: “Nah, as long as the beers are cold.”

It was a good reminder we don’t spend nearly enough time talking to real people. Desktop research and bouncing ideas around your marketing/agency bubble really is a dangerous place to view the world (to butcher a quote from John Le Carré).

Real people don’t overthink brands. Only marketers and their agencies worry about “being authentic”. Or changing the world. Or whatever the latest white paper is claiming based on stated behaviour supposedly representing an entire generation.

People don’t need more purpose from their brands. Yes it can be a valid way to position your brand, or to build a campaign around, but it’s not the only way.

In his book Decoded, Phil Barden shares a study where people were asked to purchase either their favourite brand or their non-favourite brand. Which one lights up the brain like a Christmas tree? 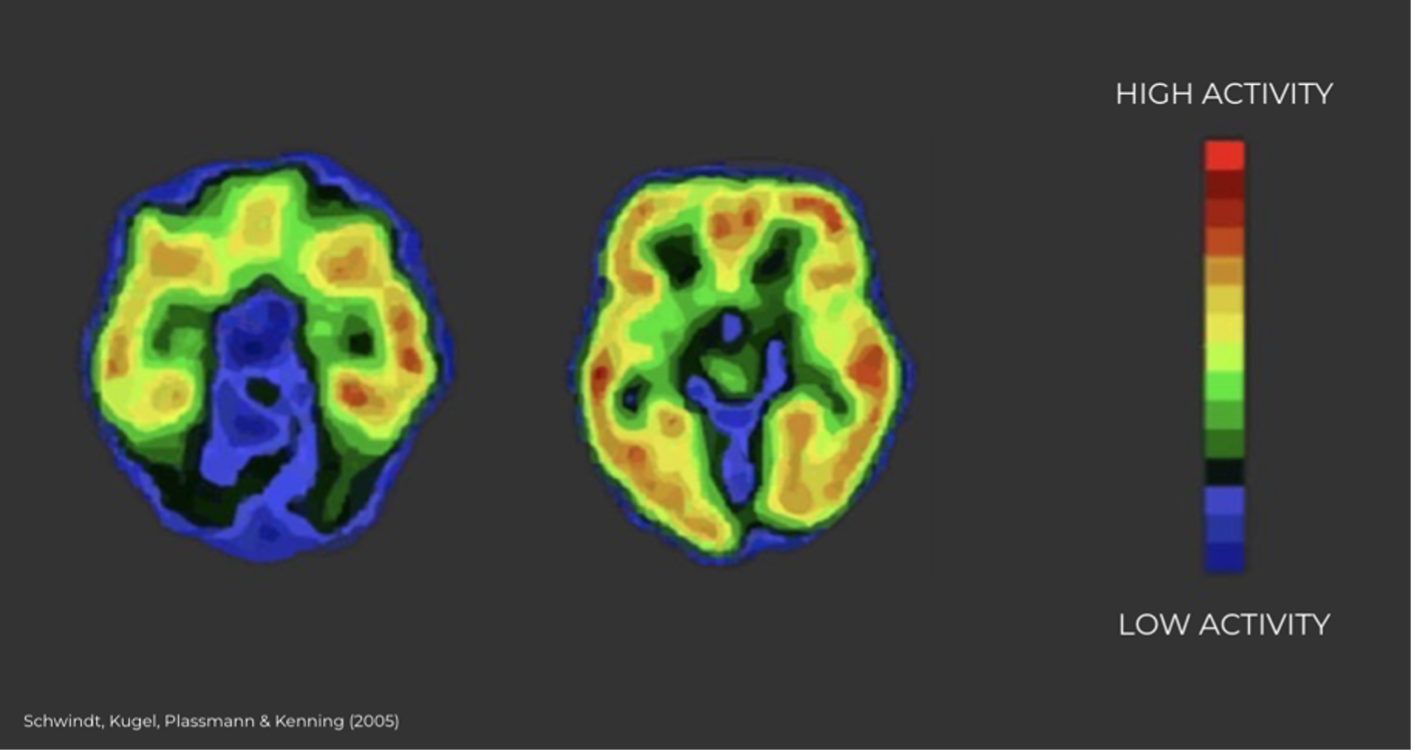 Despite common rhetoric, those buying their favourite brand are the ones who don’t light up (the left). Choosing something familiar to you is easy and doesn’t require thought. That’s how we like it. When we have to process the decision, we have to change gears. Which is hard.

Humans are hard-wired to be lazy. We don’t like to overthink. Or think at all.

Tom Roach says we need to “make our brands no-brainers”.

When we’re deciding where to grab a beer, most Aussies don’t have an internal debate about the pub’s position on vaccines. Or any other matter. Most people are ‘satisficers’ – good enough is good enough.

We must remember this when we’re building brands and creating ideas.

Our job as marketers and advertisers isn’t too difficult. Understand Clayton Christensen’s ‘jobs to be done’. Build distinctive brand assets. Connect your brand to a need. Invest in creativity to stand out, be famous and remembered. Then spend as much as you can building mental and physical availability.

Before worrying about your brand’s social cause, or how you might be able to save the world, consider if you’ve done enough to cover the basics needs real people want from you.

Be the car brand who comes to mind most easily when someone wants to keep their family safe (Volvo). Be the thing to bring when you’re told not to bring a thing (Favourites). Be the computer for creative people (Mac). Be the chocolate you eat when you’re not being yourself (Snickers).

Don’t overthink the importance of your brand. Or its role in the world. Because consumers don’t.

Instead, be the brand who comes to mind when someone wants a cold beer.

Zac Martin is a Planning Director at TBWA\Melbourne. This article was originally published in B&T Magazine.