Comment threads are very unpopular right now. Their usefulness doesn’t scale and they’re abused by trolls. It’s become easier for publishers to disable them rather than deal with the headache.

But the comments aren’t the problem – it’s people.

My Grandma Nola has written letters to Editors since long before I was born. She has three scrapbooks full of newspaper clippings – some so old they’ve almost completely faded. Of them all, the following letter published in the Herald Sun in June 1991 is her favourite. As you read through, you may recognise some familiar behaviour.

(If you’re not from Melbourne, Brighton is a very affluent suburb. Preston is not, although it’s well on its way to being gentrified these days.)

Nola’s letter is published, kick-starting the furore. (I’m not sure what a “three-numbered address” is meant to imply.) 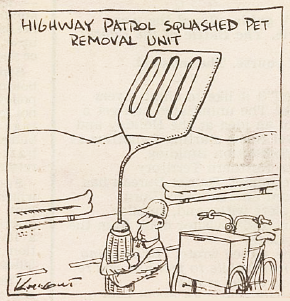 On the same day, not knowing what was coming, the cartoonist includes this piece next to it. 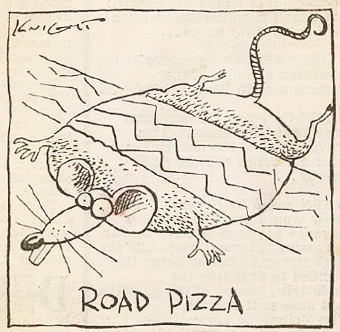 Alongside P. Piper’s reply the cartoonist jumps in again. Decent satire, albeit not entirely relevant.

Nola defends herself. But in the comment game logic doesn’t get you anywhere.

Disguised as the moral-high-ground, a troll attempts to wind both parties up.

Well off topic, but commenter Alan can’t pass up a chance to make fun of the wealthy.

The comments start coming in from both sides. Interestingly, it’s later revealed that Wayne is in fact my father, Nola’s son, dubiously using the option of anonymity.

On the other side of the fence, Rat Packer makes it personal and challenges the OP’s (Original Poster) integrity. 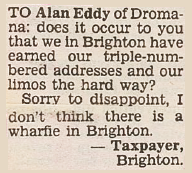 Among the banter, a “taxpayer” looks down on Alan’s comment. Of course, completely off topic by this point.

Again under the guise of moral-high-ground, this time Diana struggles to hide her snobbery and xenophobia.

By this point in the thread there’s always one reader who’s clearly not followed everything. K.S. reposts someone else’s point. 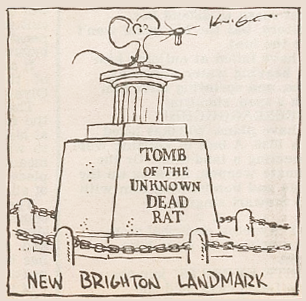 Posted too late and buried right at the bottom, the most rational comment of all.

And finally, reminding everyone there’s more to life, the Editor closes the comments.

Months later, the now-infamous Dead Rat of Brighton has one last moment in the sun.

Other than just being amusing, it’s an interesting observation of human behaviour. We see 25 years ago the same problems we see today, long before comment threads or even internet.

The only difference is now it just happens faster. And perhaps with a few more references to Nazis.