It’s no secret that Facebook’s organic reach has long been in decline. I recall sitting in a room with a client five years ago selling the channel as a cost-efficient means of talking to your consumers regularly. This was long before EdgeRank when your News Feed was sorted chronologically.

Of course, a great deal has changed since then. What was presumably once 100% organic reach of active users is now down to single digits and continues to fall. The impact of which you can see in this example highlighted by Rhys Hillman.

This is the same piece of content, posted at the same time by Snickers on two different channels. 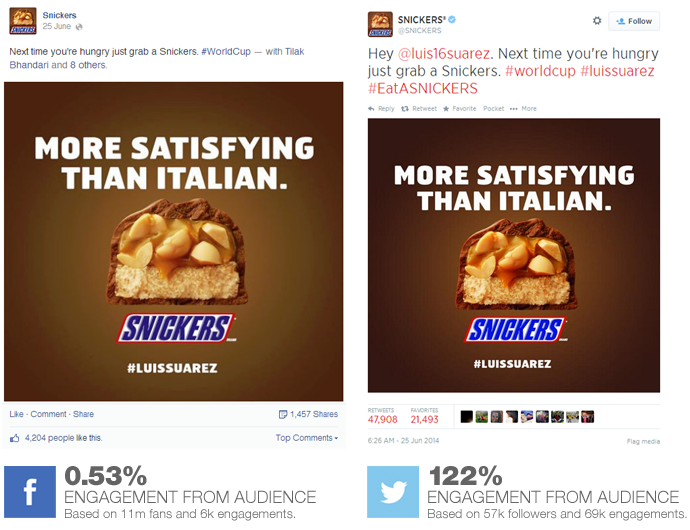 The Facebook post, distributed to a potential 11 million fans generated only 6,000 engagements. Yet when the same content was published on Twitter to a 99.5% smaller audience, it generated 1050% more interaction.
But, to be fair, the Snickers post on Twitter is an outlier of success. In fact it performed so well, that the number of engagements was actually higher than the brand’s total number of followers.

So let’s take a look at this more reasonable, less ‘viral’ post from Bud Light. 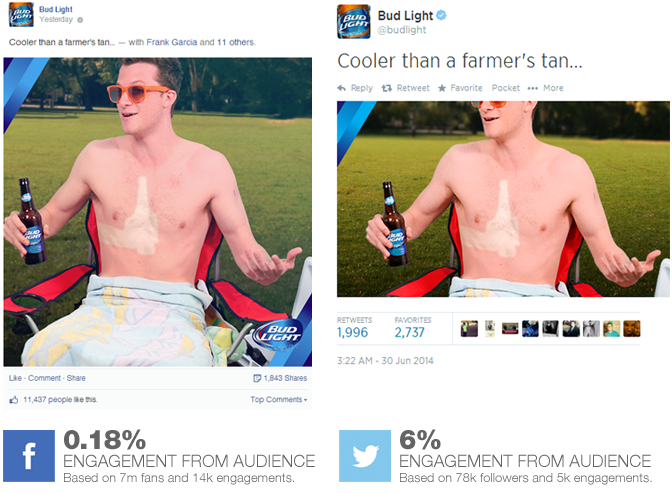 Although not as drastic, Twitter once again hugely out performs Facebook. Anecdotally, this is consistent across a number of brands I reviewed, both big and small, as well as international and local.

As this organic reach falls to nearly 0%, we become apparent of Facebook great dirty bait and switch. Facebook have encouraged brands for years to build their community (and invest significantly in media buys for acquisition) under the pretense of being able to engage with them often and for free. But that is no longer the case. And their ‘solution’ is to invest even further in promoting posts.

At the end of the day, the above examples make it increasingly difficult to justify the significant resource it takes to manage a Facebook community effectively and I wouldn’t be surprised if clients start shifting their budgets elsewhere.