Everything you do in digital is a chance to generate a lot of conversation. Positive or negative.

Even the small things can go far. Good or bad.

But I particularly like this App Update description from Commonwealth Bank. 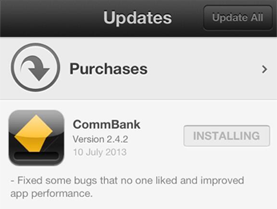 It wasn’t briefed into a copywriter. But someone put two seconds into what would otherwise be another update you wouldn’t read. And it resulted in a smile. And a few people even shared it.

That’s why it’s always surprised me that Community Management is generally considered an entry level or junior position in most organisations. If consumers notice and amplify the small stuff, imagine how they’ll react to what’s said to the community.

Your next Facebook post or online customer service response could be on the front page of Mumbrella. For good or bad reasons. So it might be worth the extra two seconds.